Contact us at Hello@cultivateart.in for more information on the artworks.

While travelling from my origin (India) to the West, I have been in the process of creating a personal abstract language, which communicates and re-contextualizes this change through the movement, which can be seen in my paintings.

Elements like colour, line and texture in the compositions create visual vibrations, which serve as metaphors for this abstract language.

Colour, being an essential part of my working process, not only goes beyond its actual visual existence, but also expresses my response to instrumental piano music, which stimulates my imagination.

The application of multiple layers on the canvas in different mediums creates an interesting texture and division, giving more depth to the painting. The accidental or spontaneous as well as the intentional forms are applied alternatively which become an integral part of the composition and maintain the harmony of the painting.

My work is very intuitive, exploring the vastness of my interior world – not seen in everyday life, but felt as very real to me.

In my paintings, I hope to communicate with the viewer my motivation and creative process through this abstract language; in order to leave the door open to interpretation and to initiate an exchange of dialogue. 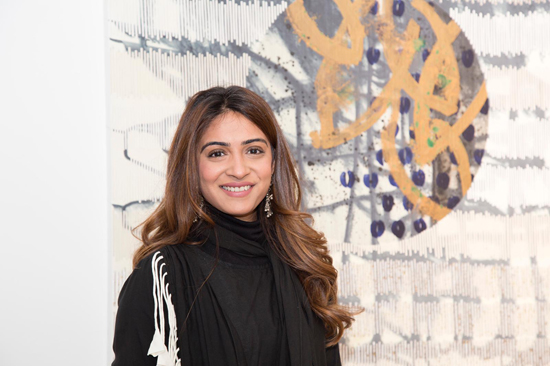 Rajvi Dedhia Unadkat is an abstract artist who completed her BFA from the Sir JJ School of Art, Mumbai and went on to further graduate from Chelsea college of Art and Design, UK. Her artworks oscillate between the familiar and the unfamiliar, the known and the unknown, the controlled and the carefree. She chooses to keep her works ‘untitled’ as they are negotiations of a space which present an intriguing ambiguity of coexistence.

The palette is maintained neat and austere, limiting the colours and hues to neutral greys and off-whites beiges and blacks. In some of her works, the original layer is rich in textures, made with metallic paints, closely laid out vertical lines drawn on to the canvas directly to bring out depth, and the sudden controlled row of vertical strips, aimed to create an interesting polarity of form and structure.

She comments, “My work explores the interior world, expressing the emotional and feeling nature of it with colour, form, line and texture. I am intrigued by the way a work of art conveys that which often cannot be spoken and is perhaps better left unsaid. High-strung or subdued, joyful or agitated- there is room for all of it in a painting. It is the expression of the vastness of our interior worlds not seen in everyday life but felt as very real.”

The artist's works have been influenced by her travels, as in from Mumbai to London, and then on to New York, and back to London. Her artwork also expresses her response to instrumental piano music, which stimulates her imagination. She is a widely exhibited artist, both in group and solo exhibitions across the globe.